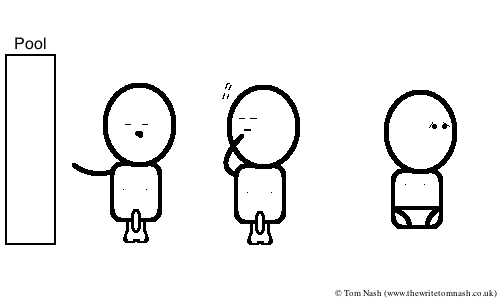 While I am by no means a chunky monkey, as my third decade of existence creeps ever closer, the fact that I do less than no exercise, love me some cake, burn my way through my fair share of Silk Cut and suffer with the occasional bad back has begun to play on my mind a little, so me and the missus decided to do something about it and earlier this year I started tearing up the local pool like a short, pasty, terribly unfit Michael Phelps.

As I am not especially fond of the general public and because I work for a living, we venture to the pool as late as we can. However, while we miss most of the folk who frequent the place we still have to deal with:

The naked old man
Who insists on keeping his withered tackle on display for as long as humanly possible without warranting arrest for public indecency. The best way to do this is to hold naked conversations with the other creepy naked old fella who happens to be there, pausing mid-change to pass judgement on the flavour of Quorn mince, or to struggle to remember the name of that new pill the doctor has put them on, preferably as close to the lockers or pool entrance as possible so everyone has to pass them at some point… Ew.
END_OF_DOCUMENT_TOKEN_TO_BE_REPLACED

I played Squash the other week. Other than walking places and an annual game of football, it was probably the first formal exercise I’ve partaken in since… A long time. I thoroughly enjoyed myself and am pleased to report that I did not throw up or pass out even once.

While I was only there an hour, I met plenty of interesting people and I was also reminded of the brief period of time that I was a member of a gym, as the people I met in the sports club were exactly the same.

So who do you find at gyms, leisure centres and sports clubs? Without further ado, let’s get generalising:

The ‘professional’
Usually a shit one as they are supplementing their income by offering coaching services at a sports club in [your hometown]. Eternally sweatsuit-clad (personalised if they’re really delusional) they watch you playing (or working out) for a while before interrupting with handy tips and advice on how you are doing everything wrong. They are always quick to mention titles they’ve gained and tournaments they’ve won, as if being county champion is some kind of deal-breaker that will immediately cause you to sign up to one-on-one lessons…

Although they are infinitely less irritating than:

The pimp
Somehow, they always tend to be the person using the court, pitch or equipment before you. They feel it is their duty to interrogate you on your level of skill and advise you of the excellent coaching services the club’s professional offers… Possibly a shareholder.

The needlessly competitive
They might be using the treadmill, rowing machine or cross-trainer next to you or they could be the person you’re playing against. Whoever they are, they take their exercise VERY seriously. They will always have a faster speed and higher gradient than you on the treadmill, more weight on the rowing machine and give everything they have, whatever sport they are playing, no matter how little experience or skill their opponent possesses.

The boaster
This fella can bench-press a lot of pounds. Good for you, mate. Of course, those numbers mean fuck-all to me, as having been educated in the UK in the 1990s, my mind works in the metric system. To be fair, 110lbs does look ‘more impressive’ than 50kg… I wonder how busy gyms would be if blokes could exercise their cocks bigger…

The naturist
The fella that strides triumphantly around the changing room stark-bollock-naked. Usually middle-aged, very hairy and rapey-eyed.

The imposter
Like Ethan Hawk in Gattaca, this person is intent on denying their lack of fitness. They hide behind bravado and claim to have experience and knowledge of whatever it is they are turning their hand to. Five minutes of sustained activity later, their gasps, wheezes and intense perspiration reveal the truth, although they will always have an excuse ready to excuse their poor performance. This is probably the same person that gets really drunk, throws up and passes out then the next day claims that they ate something that upset their stomach.

More after my next foray into the world of exercise…